Acknowledging challenges in understanding contemporary art, Information Proliferation creates a context for selected works in Girls' Club's current exhibition, Self-Proliferation. The project provides information about the artists, their career and their specific body of work. By sharing her findings, Mariela hopes to enhance accessibility and appreciation for the works.

My research methods are very straight forward. I started by reading things that sparked my curiosity. Bibliographies in artists' websites are a great place to look for interesting articles by interesting writers. Looking thoughtfully art the art is important. We often don't give ourselves enough time to look at art objects, ask ourselves questions and give ourselves the authority to reach our own conclusions. So think about it, and share!

Do you find contemporary art can be confusing?
What resources do you wish galleries and museums would provide?
Do you find yourself spending more time with art that you understand vs. art that is confusing?
As a viewer, do you think its worth investigating art that you don't understand? How would you do that?

As part of Information Proliferation's goal to enhance understanding, and appreciation of artwork by contemporary women artists, Mariela is encouraging a conversation about the artwork shown below and she wants to hear from you!

Mariela Acuna was born in San Jose, Costa Rica and relocated in South Florida in 2008. She earned a BA in Art History and a BFA in Sculpture from Florida Atlantic University. During her time at FAU, Mariela worked at the University Galleries where she quickly grew from intern, to student employee to guest curator. In the summer of 2014, she worked as an artist liaison intern at Lehmann Maupin, New York. Mariela curated New Art: South Florida, an exhibition that presents recent works by artists who were awarded the 2015 South Florida Cultural Consortium Visual and Media Artist Fellowship. She currently works at  Norton Museum of Art as the Family Programs Coordinator.

More information on Mariela and her fellowship projects can be found at www.girlsclubcollection.org/hello-fellow-mariela-acuna. 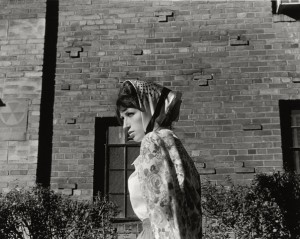 Cindy Sherman’s Untitled Film Still #19, (1978) corresponds to a series of sixty-nine photographs produced between 1977 and 1980. During her Art 21 interview, when speaking of the Film Still series Sherman said,

“I didn’t want to make what looked like art,” and explains that “film has always kind of been more influential to me than the art world.”1

She recalls spending several hours a day watching films in the basement of her family’s home. The black and white photographs in this series are made to resemble European films from the 1950’s and 1960’s and their characters are imagined to mimic the raw, expressionless female characters portrayed in those films.

When she began to work on this series, 23 year-old Sherman had recently moved to New York City after completing her education at SUNY Buffalo State. She was living in a small studio apartment on Fulton Street that she used as her studio. She was making art with limited space and resources and working alone, which she continues to do today. Working alone allows her to imagine and become her characters, design the space to photograph them and even imagine their personalities or what they were thinking at the time.

Untitled Film Still #19 was shot outside, however, many of the photographs from the same series were taken in her studio apartment. The photos that were taken outside, such as the one in Self-Proliferation, required the assistance of a second person to help her take the photograph. She was often assisted by artist, Robert Longo, who was her boyfriend at the time, Charlie Sherman, her father, or others. In her essay included in her monograph by MoMA, The Complete Untitled Film Stills, Sherman recalls having great fun with her friends and family as she dressed and undressed in the middle of the road each time that she felt she found a great “spot” to photograph a character that she had in mind.

Untitled Film Still #19 shows Sherman, in costume, the figure in the center of the frame, looking as though she is going somewhere. Sherman describes the expression of the subject as

“the moment right before the emotion comes out.”2

As she developed this body of work, Sherman was interested in implying a narrative through a still image. She had worked on video while she was at school in the 1970s. When the Untitled Film Stills series is presented together, as it was exhibited for the first time at the Hirshhorn Museum and Sculpture Garden in 1995, you may begin to notice narrative threads throughout the photos as the same character is found in multiple photos with similar yet different expressions. The character in Untitled Film Still #19, also appears in Untitled Film Still #17, #18, and #20.

In 2012, the Museum of Modern Art in New York presented a survey exhibition of Sherman's career to date. Although the exhibition was not presented chronologically, it demonstrated that Untitled Film Stills was the last body of work that Sherman photographed outdoors. Since the 1980s, Sherman has been working in her studio and using color instead of black and white photographs. Also, Untitled Film Stills is the only series of works that Sherman titled, others have been given unofficial titles by curators or historians who have written about the work.

It is important to Sherman that the work is not described as a self-portrait. She wants her viewer to think of herself as somebody else when she is in costume. She said,

“I really don’t think that they are about me. It’s maybe about me maybe not wanting to be me and wanting to be all these other characters. Or at least try them on.”3 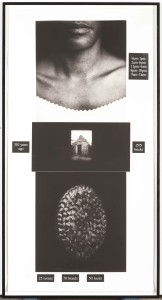 Originally trained as a documentary photographer during her undergraduate studies at the School of Visual Arts in New York, Simpson became a pioneer on conceptual photography in the 1980’s while completing her studies at University of California, San Diego. It was in San Diego, that Simpson began to experiment with text and image. Some of her peers at that time include contemporary photographers Carrie Mae Weems and Martha Rosler, (both included in Self-Proliferation) who are also known for pushing the limits of photography.

Simpson’s open ended word and image associations leave room for interpretation, allowing the viewer to project his or her ideas onto the work. Speaking of Simpson’s works that include text and image, Kellie Jones said,

“When these works appeared in the early 1980 they held up the medium of photography for intensive interrogation. Using the traditional format of the silver print, Simpson questioned the authority of realism that defined the photographic project.”1

Counting presents three images and six combinations of words and numbers. The images, stacked vertically from top to bottom present, a black woman, a circular hut and tightly braided dark hair. The woman whose face is cropped out of the frame wears a white gown found in several of Simpson’s works of the 1980s and early 1990s. The following quote by Kellie Jones is available on Simpson’s website next to Counting,

“...a large coil of braided hair repeats the pattern of bricks in the image of a circular slave quarters above it, at once making the distance and proximity of the past.”2

The numbers in this work function both as quantifiers and measurements of time. They tell us how many bricks were used and how long ago. Labor is measured in terms of time and product. How many hours did you work? Where? What did you produce?

Simpson’s work has been discussed chiefly in terms of questions of gender and race. In Five Day Forecast, also from 1991, we are presented with five images of a black woman wearing a similar garment to the one in Counting. The five photographs are aligned horizontally, each slightly different from the other. Above each image, a series of plaques are engraved with text that reads the days of the week from Monday to Friday. Below the images, ten more plaques read ‘Misdescription’, ‘Misinformation’, ‘Misidentify’, ‘Misdiagnose’, ‘Misfunction’, ‘Mistranscribe’, ‘Misremember’, ‘Misgauge’, ‘Misconstrue’ and ‘Mistranslate’. During an interview for the video series, TateShots, Simpson shares,

“Five Day Forecast was done at a time when I, had secretarial jobs and all these different kind of receptionist jobs to help support myself as an artists, and the different experiences of kind of being in different work environments influence the work. So Five Days Forecast is the events or forecasting of what could happen within one’s week."3

By using language to suggest an alternative understanding of photographic meaning in her work, Simpson invites her viewer to question issues of gender, race, labor and the notion of photographic truth. 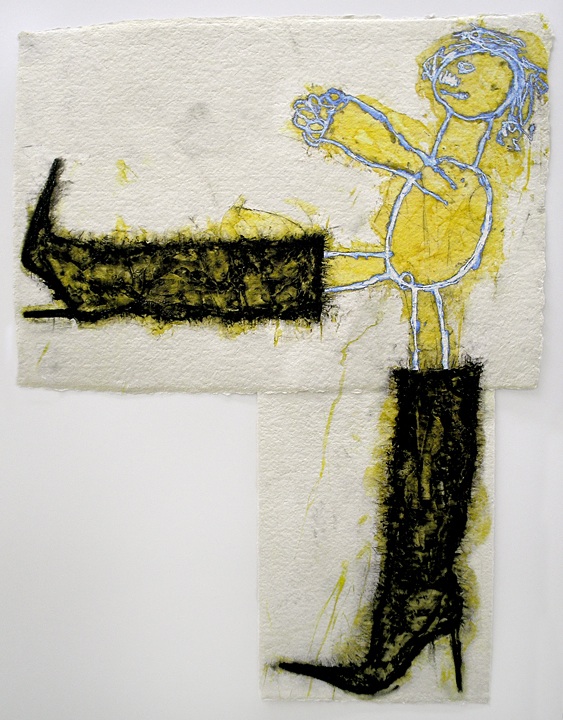 Ida Applebroog was born in the Bronx into an orthodox jewish family. She attended the New York Institute of Applied Arts and Sciences to earn a degree in graphic design. Her and her husband later decided to move to Chicago, where Applebroog attended the School of the Art Institute of Chicago and enrolled in television correspondences school. After living in Chicago, her and her family moved to San Diego. In 1977 she taught at the University of California, San Diego before returning to New York.

Once in New York, Applebroog began to make self-published booklets that she would send to people in the artworld. She started by sending them to artists that she admired but her mailing list grew quickly and the reactions ranged from thankful to hateful. The booklets from the 1960s and 1970s used repetition to tell stories that were uncomfortable and strange, something that we continue to see in her work today. In an interview with BOMB Magazine she compares her art with the 6am news and says about her subject matter,

Her work often takes its viewer into a complicated psychological state by making him or her aware of the exhausting list of issues related to gender and violence.

Fendi Progeny corresponds to a suite of four prints from 2005 titled Progeny Series. The other works in the series are Prada Progeny, Jimmy Choo Progeny, and Chanel Progeny. Each work in the series presents a roughly articulated figure rocking fancy shoes. The figures seem to be wearing nothing else besides their shoes as if they were intentionally exposed. A progeny, a descendant of something or someone suggests Applebroog’s feelings that we are a product of material culture and media’s standards about what women should look like. Applebroog has used high heels as a symbol for the sexualization of women on several other works including, Modern Olympia (After Versace) (1997-2001), and her Fancy Shoes Series (2003).

The pose used in Fendi Progeny is revisited almost ten years later in Ethics of Desire, 2013, a work that was included in a 2015 exhibition of the same title at Hauser and Wirth, New York. Ethics of Desire presents six panels depicting nine women marching in a line, wearing thigh-high boots, silver soldier hats, and nothing else. The exhibition was installed to make the drawings, which were hanging from the ceiling, look like their subjects were participating in a "fashion cat walk," with lighting shining straight at them and lines of chairs on both sides for people to sit and look at them. The installation of the art objects reinforcing Applebroog's antagonism towards the violence and sexualization of women.

Funding for this project was made possible in part by Funding Arts Broward, Broward County Board of County Commissioners as recommended by the Broward Cultural Council, the State of Florida, Department of State, Division of Cultural Affairs and the Florida Council on Arts and Culture and private donors.