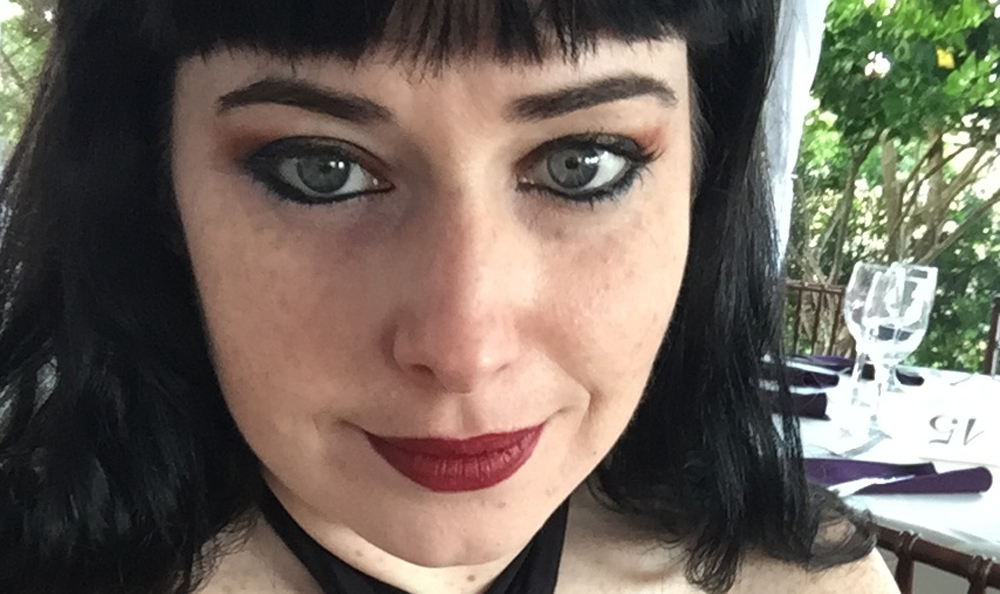 Writer to Writer is a guest blog project from Girls' Club writer in residence Jan Becker that focuses on local writers and their perceptions of how femininity and self-proliferation figure into their work..

Cathleen Chambless is from Miami, Florida. Her debut collection of poetry is Nec (Romantic) (Gorilla Press; 2016). Poet Campbell McGrath calls this book, “Witchy, incantatory and viper smart, Nec (Romantic) is part black magic, part madcap Mother Goose, part postfeminist manifesto.” Her work has appeared  in MPC’s 10 Cent Journal, the anthology A Touch of Saccharine,  Kind of a Hurricane Press’s Best of 2014 Anthology, The Electronic  Encyclopedia of Experimental Literature, Jai-Alai, The Mind[Less] Muse, and she was a poetry finalist for the Bellingham Review’s 2014 Parallel Award for poetry. She co-authors a queer/feminist zine called Phallacies.

Chambless will be one of the authors reading at the Catalogue Launch at Girls’ Club, Saturday, June 25th  at 7pm.

For this interview, Girls’ Club Writer in Residence, Jan Becker, talked with Chambless about redefining the familiar, activism and artistry, where poems find their shapes, and drawing reader attention to the dark and macabre. A poem from Nec (Romantic) follows the interview.

JB: Cathleen, thank you for agreeing to do this interview, and congratulations on the publication of your first book, Nec (Romantic). It’s fantastic! In the poem “Necromantic” you create a “Glossary for the Practitioner.” It occurs to me that writers often redefine familiar words or ideas in surprising ways. For example, in that poem, your definition for deity, is “feather of a dandelion.” That makes perfect sense to me now that I’ve read it, but I’m not sure I would have thought of dandelion fluff in quite that way on my own. Where do you think that impulse, to redefine, comes from?

CC: First I’d like to say thank you so much! I’m glad you enjoyed the book. This is an interesting question. I am fascinated with the etymology of words. Many times, a word has a hetero-sexist or racist background. You know the expression how history is told by the perspective of the oppressors? I feel like language can be that way too. I like to queerify language and de-gender it. Clinical definitions are also just terribly dry; an image can just as easily suffice. I feel like redefining the familiar can be a political gesture, but it can also just be delightful. In the house I live in, which is a queer-anarcho punk house, I met a lot of rad queer folks, including witches and fairies. I learned about facets of society/subcultures I was completely oblivious to before. Suddenly new worlds were visible and I realized how small I am, how much there is to see.

JB: Of all the writers I know, you are probably the most Guerilla Girl-ish , badass art activist poet woman that I’ve met. In addition to poetry, you make zines and create visual art. You’re also very social justice-oriented and actively support causes that are important to you. Can you talk about some of the injustices you work towards righting?

CC: That is probably the best compliment I have ever received. Thank you! This is actually a tough question to answer. I don’t really have one injustice over another that I am currently fighting. I don’t feel quite right saying it that way. I believe in the importance of seeing how different oppressions between people can intersect with one another. In that aspect, solidarity is created and we can help each other fight. Solidarity truly is a beautiful thing, and I am not embarrassed to say it makes me cry. I do notice, however, that where one group is oppressed, there is another group profiting off of that oppression. I see it as one of the main reasons why oppression exists. Which I find to be truly evil.

JB: How do poetry and art figure into your activism?

CC: Poetry and art figure into my activism because these mediums have become outlets for the rage and pain I feel towards many injustices. Some of these injustices I have experienced personally, some are injustices I see friends and even family go through. There is a very real trauma that comes with oppression, which I think deserves to be seen and acknowledged. There has been so much silencing, and I refuse to remain so.

JB: Can you talk a little about the work you do with Seed 305? What kind of effect has your work had on the young people who attend your workshops?

CC: Seed 305 is an anti-oppression, popular education based workshop series. It’s currently on hiatus, but I facilitated meetings. Basically, we go through different forms of oppression such a racism, patriarchy, transphobia, etc. and attempt to get participants to see how these forms of oppression exist and how capitalism plays a role in all of them. We do a lot of group activities in order to go over each topic. For people whose may not experience a certain type of oppression due to their privilege, it is an eye opener for them. For people who have experienced the form of oppression we are covering, it is very validating. I was actually really surprised at how effective these workshops are. My first workshop was on patriarchy. It was with a group of high school students, primarily boys. One of them said something like “Is this whole workshop going to be about how everything is our fault?” And I thought to myself, here we go. But by the end of the workshop that same boy was saying “We have to do something! This is wrong!” It gave me hope. This is not an uncommon experience. Some participants go on to be facilitators after the workshop series, organize socially conscious arts, and further their participation in the social justice community.

JB: As a poetry reader, I like to sometimes take a wide visual stance and look at poems from a distance, to see how the poet shapes words on the page. Your poems come in all different shapes and sizes. Some are just a couple of lines, some are long with wide lines that sprawl across the page, or long , but lanky—tall skinny poems, and some are tight prose-looking blocks. I also saw some poems that look like lace on the page, with space right in the middle of a line. As a teacher, I know one thing that seems to confound beginning poets is how to shape poems, and where to break a line. How do your poems find their shapes? Is it something that comes organically when the poems come to you, or do you have to wrestle your poems into shape in revision?

CC: Sometimes it comes organically. I knew I wanted the poem “Banner” to be skinny like a flagpole or a stake in the heart. Other poems, such as “Egyptian Fairy Voodoo,” took some wrestling. It started off as a prose poem and then turned into one of those tall and skinny poems. That was because when I read it out loud, I was told it sounded more like a lineated poem. Sometimes, I find, when something is just “not quite right” with a poem, like for all intents and purposes the poem is fine, there is just something “off,” it usually ends up being the form. So, that I use as an indicator sometimes. I would also like to write more concrete poems in the future.

JB: I noticed that you have this ability with your poems to draw your readers' attention to images or ideas that are dark and disturbing. For example, "Saturn Devouring his Son" is an ekphrastic poem about Goya's famous painting. Incidentally, the first art museum I went to was the Prado in Madrid, and I remember seeing Goya's black paintings after touring a whole gallery of happy portraits, and coming at the end of the tour, that painting and "The Dog" (another of Goya's dark works) were the two paintings that stayed with me. Your poem about the painting is every bit as gory as the original artwork, maybe more so, because the reader gets to glimpse inside Saturn's head—and that's a disturbing place. But then you also have a poem about the botfly that I'll admit made me queasy. What kind of response have you gotten from readers who encounter your dark poems? I know as writers, we sort of have to let go of reader responses at some point, but what do you hope your readers will come away from those poems with?

CC: I have been to that museum! I know exactly which room you are talking about. Goya’s dark period has always fascinated me. I remember seeing that painting for the first time when I was a kid and I thought to myself “am I allowed to be looking at this?”

Is it weird that it makes me feel proud to know I made you queasy? I take that as a very high compliment, so thank you. For the most part, I have received positive feedback for my darker poems. Literary Orphans accepted “Saturn Devouring His Son,” and they gave me very nice compliments in the acceptance letter. I have one friend suggest to go darker, that I am holding back something, and I don’t necessarily agree with him. I am not trying just to disgust people, or write for shock value, that’s not my intention. We are bombarded with violent images daily, and for what? Usually my darker poems are allegorical. There is some sort of lesson in there, or something I am trying to say. Life is not pretty, people commit atrocious acts. I want to focus on those moments and draw them out. For example, “The Botfly” is a bit of an extension for the whole “ignorance is bliss” cliché. Sometimes the truth is just that awful. As with “Saturn Devouring His Son,” I am glad you brought up that I described his mental process. I had one friend read that poem and say, “this makes me paranoid that I am capable of that (eating their newborn child).” Which is kind of the point. Saturn is obviously a God, but I gave him chromosomes in this poem, along with other bits of human anatomy, to illustrate that this is more than mythology, it’s humanity.

Once upon a time

I was a shell,

left behind on a blade

sloughed off by the thorns

Even my eyes shed,

yes, I once existed,

you can keep me in your pocket,

or pressed between the pages

of your journal, if you please.
But where, who, & what

belongs only to me.

About Writer in Residence Jan Becker

Jan Becker, local writer and poet, has been selected as Girls’ Club 2015/2016 writer-in-residence. Becker will work collaboratively with Girls’ Club to present various public programs and contribute writings in conjunction with the exhibition Self-Proliferation, curated by Micaela Giovannotti.

Jan Becker was born in a small coal-mining town in Northeastern Pennsylvania, and subsequently grew up in a Marine Corps family on military bases all over the United States. She completed her BA in English, Creative Writing and Rhetoric with a concentration in Global Cultures at SUNY Binghamton, where she was awarded the Andrew Bergman Prize in Creative Writing, and the Alfred Bendixen Award for her creative honors thesis.

She is currently an MFA candidate at Florida International University, where she is focusing on creative nonfiction for her thesis. At FIU, she's taught courses in composition, technical writing, creative writing and poetry. She has also taught poetry and nonfiction workshops with Reading Queer and First Draft with the Center at MDC.

In 2015, she won an AWP Intro Journals Project Award for creative nonfiction. Her work has appeared in the Florida Book Review, WLRN, Emerge, Sliver of Stone, and Circus Book, among other places, and is forthcoming in the Colorado Review. She has also been a regular contributor to the online photography and writing project Selfies in Ink, and is a freelance copywriter and editor.