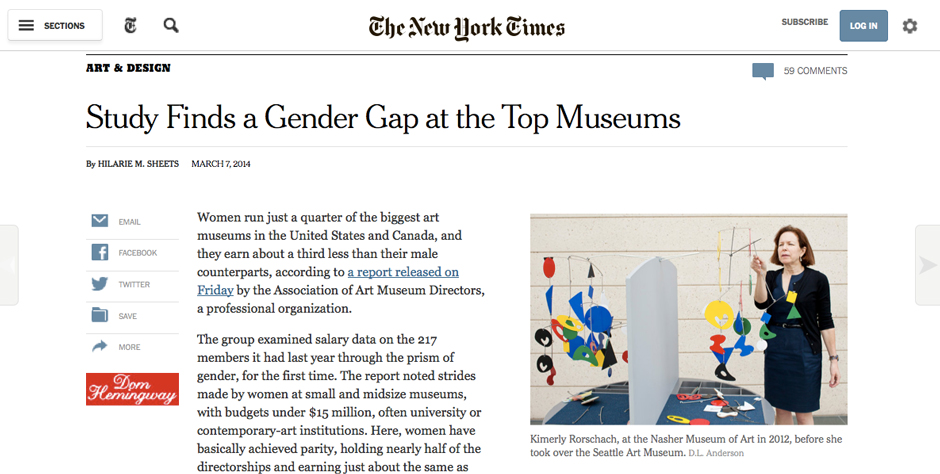 Women run just a quarter of the biggest art museums in the United States and Canada, and they earn about a third less than their male counterparts, according to a report released on Friday by the Association of Art Museum Directors, a professional organization.

The group examined salary data on the 217 members it had last year through the prism of gender, for the first time. The report noted strides made by women at small and midsize museums, with budgets under $15 million, often university or contemporary-art institutions. Here, women have basically achieved parity, holding nearly half of the directorships and earning just about the same as men. But the gap is glaring at big institutions, those with budgets over $15 million: Only 24 percent are led by women, and they make 29 percent less than their male peers.

And just five of the 33 most prominent art museums — those with budgets greater than $20 million — have women at the helm.

“There is a difference if a woman is running one of these big museums,” said Elizabeth Easton, director of the Center for Curatorial Leadership, a training program in New York that has helped place nine women in directorships, but none at the country’s most influential museums. “Those directors are the most loud and authoritative voices. It sets the tone.”

She added: “Everyone just claps their hands and says that it’s getting better. But with boards full of men and search committees gravitating to men, it’s not going to get better.”

Christine Anagnos, director of the association and one of four authors of the report, pointed to a trend of high-profile appointments of men at major museums, replacing female directors, including in Philadelphia, Dallas and Newark.

That trend could change, with the Cleveland Museum of Art searching for a new director; with the announcement last week by Malcolm Rogers that he was retiring from the Museum of Fine Arts, Boston, as soon as a successor is found; and with the directors of the National Gallery in Washington and the Brooklyn Museum being over 65.

But experts debate not only whether women will get those plum jobs, but also whether they will pursue them. “Is it that women are not being offered those jobs, or they’re choosing not to take those jobs?” asked Lisa Phillips, director of the New Museum in New York, who initiated the idea for the study.

Written in partnership with the National Center for Arts Research, the report, called “The Gender Gap in Museum Directorships,” explores the factors contributing to the gulf at the top and frames the findings within the debate provoked by Sheryl Sandberg’s book “Lean In” and Anne-Marie Slaughter’s 2012 article “Why Women Still Can’t Have It All” in The Atlantic.

Combining large and small institutions, the report found that an average of 42 percent of the association’s museum directors were women. That is certainly a different picture from 25 years ago, when only 14 percent of museums in the association were run by women, and a slight improvement from 38 percent five years ago.

On average, however, women who run art institutions earned 21 percent less than their male counterparts in 2013 — a bigger difference than the 18 percent overall median pay split between the sexes reported by the federal Bureau of Labor Statistics.

The report, which incorporated observations from interviews with six executive search recruiters, considered reasons for the gap, including the ratio of men to women on museum boards, which hire directors. While the recruiters agreed that boards were no longer all-male clubs — women now outnumber men, 59 to 30, on the board of the Museum of Fine Arts, Houston, for instance — gender ratios remain uneven. At the Metropolitan Museum of Art, the male voting members still outnumber female ones, 23 to 10. At the National Gallery, the board has seven men and two women.

But Ms. Phillips is skeptical about how much gender composition on a board is a factor in hiring. “We all have biases,” she said. “There are many subtle forms of discrimination and self-censorship that are culturally ingrained.”

Kimerly Rorschach, a finalist in 2011 to direct the Houston museum, was hired in 2012 to lead the Seattle Art Museum, which has a $23 million budget. She made the leap from director of the Nasher Museum of Art at Duke University, whose budget is under $5 million.

“Seattle had an experience of a very successful woman director, and gender wasn’t an issue for them,” she said, referring to a predecessor, Mimi Gates. “In some of these searches, I think boards can be more focused on outward appearances or the job the person held before than whether they’re really bringing the right skills to the job.”

Charles Wright, the chairman of the Seattle museum board, which has 39 men and 35 women, said of Ms. Rorschach’s compensation: “We’re paying what we perceive as top dollar for our current director, and she negotiated well for it. Maybe men historically have had a more inflated sense of themselves and have negotiated harder for compensation than women have.”

The skill set for the route up is different from the skill set to be an effective leader, said Kathryn Kolbert, director of the Athena Center for Leadership Studies at Barnard College, which was not involved with the gender gap study. “Many of the skills that women bring are collaboration, working well with boards,” she explained. “But women do worse on the visioning factor than men.”

Sarah James, of Phillips Oppenheim, an executive recruiter, worked with the Metropolitan Museum, the Guggenheim and the Museum of Fine Arts, Houston, in their last director searches — resulting in the hiring of three men. She said that while women often focused in interviews on how they were great managers, male candidates tended to lead with their ideas and “are very comfortable saying this is what we could do together.”

Professional training programs have helped many women move into directorships at midsize museums. Olga Viso, who participated in the Getty Leadership Institute in 2004, is now in her second directorship, at the Walker Art Center in Minneapolis, after leading the Hirshhorn in Washington. Since 2008, the Center for Curatorial Leadership has helped 13 curators become directors, including nine women.

But, of the 13, it was a man, Gary Tinterow, a curator for 28 years at the Metropolitan Museum, who landed the biggest directorship, at the Houston museum, with an operating budget of $52 million.

Kathy Halbreich, a former director of the Walker, questions whether many women actually want to run the big institutions. “Walker was the institution I wanted to lead,” said Ms. Halbreich, who chose not to pursue another directorship after her 16-year tenure there, and focuses on curatorial initiatives as associate director of the Museum of Modern Art.

She pointed to three directors and friends — Ann Philbin of the Hammer Museum in Los Angeles, Thelma Golden of the Studio Museum in Harlem, and Ms. Phillips of the New Museum — and said, “Each I know has been approached by bigger institutions, and out of a great sense of mission and self-awareness has decided that where they are is where they’re happy.”

Ms. James, the recruiter, said she had a difficult time getting women interested in the Guggenheim director’s job in 2008, which called for managing its institutions around the globe. “We heard from them that it seemed like an empire,” she said. (The job went to Richard Armstrong, former director of the Carnegie Museum of Art.)

But Ms. Phillips, looking across the whole field, now has her doubts about whether women should reject major leadership positions as they open up. “When you see the absence of women,” she said, “it makes you wonder whether it’s something that we really need to do, regardless of whether we want to do it.”

A version of this article appears in print on March 8, 2014, on page C1 of the New York edition with the headline: Study Finds a Gender Gap at the Top Museums. Order Reprints|Today’s Paper|Subscribe

Read the original article at www.nytimes.com/2014/03/08/arts/design/study-finds-a-gender-gap-at-the-top-museums.html?emc=eta1