Sometimes your things are my things (the great exchange), 2013

An installation and site-specific project with Kerry Phillips 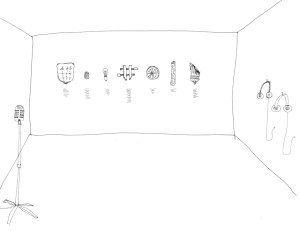 Artist Kerry Phillips invites fair goers to partake in a great exchange by offering select objects for barter with things or other objects visitors have in their current possession.

Each object will be documented, and a running record of objects kept as they come and go. As each object is swapped, the artist and the participant must confront the natural tendency to find/collect/keep, and oppose it with the deliberate attempt to avoid attachment, embrace temporality, and let go of their “things”.

A record of each object’s story and value will be documented via audio/video recordings and made available for replay on site.

Some histories are expected to be intricate, with many details, while others will be brief, truncated, staccato in rhythm. This dynamic reflects the textures of the objects themselves and their relationship with each other. Seven objects will consistently be on view, and their arbitrary correlations thrown into contrast.

The exchange/acceptance/valuation of these objects will offer a counter to the atmosphere and economic activity occurring at nearby booths at PULSE Fair and other fairs.

Come to our booth and connect with us in person! Offer an exchange and tell us it’s story.

Kerry Phillips has shown extensively in Miami including projects with Locust Projects, the Miami Art Museum, the Art & Culture Center of Hollywood & the Girls’ Club Collection. In 2010 she won Best in Show at the Boca Raton Museum of Art’s annual All Florida juried exhibition. She has received other grants for her art making from public and private organizations as well as residencies and shows in Vermont, New York, North Carolina, Berlin, Krakow and France. Phillips lives and works in Miami with her dog, Tonta, who is, a little bit. Her studio is currently at The Fountainhead Studios in Miami.

My parents grew up on farms. One grandmother collected things (kept things) and the other was a Grand Storyteller. Both influenced me greatly. I create sculptures and installations using materials available in a given place at a given time – ranging from things found to collected experiences and retold stories. Often, I’ll alter a space using architectural interventions and enlist the public’s participation in the gathering of materials or through performative interactions.

I used to find and keep objects for their potential but I now have a more immediate approach to working with materials and sites: finding, using and letting go. I’ve drastically limited my bounty of resources, forcing myself to rely heavily on insight, good oldfangled farm know-how and my MacGyver-like resourcefulness.

Limiting my resources has also led me to engage viewers more directly in scheduled events and unscheduled mini-events – like the “farm tours” I’ve given in various places where I guide groups around, pointing out and describing bits of my father’s farm (site of the ongoing “The Farms Project”) as if we were actually there; collecting phrases in French from French people in France; using masking tape to write large letters to crushes I’ve had; getting people to “draw a line” for a bound book of 524 lines on 524 pages by 524 people; or in building tents in people’s living rooms using materials they have on hand.

I remain fascinated by collections – even if a bit wary. I abstain from collections by giving myself art-or-else deadlines. Sometimes your things… is such a project, covering the walls with homemade cardboard shadowboxes filled with things found and kept over the years. My parents’ junk drawer… reveals my attraction to meaningless objects that I am, nonetheless, charmed by and have fond memories of.

The Great Exchange is the most recent manifestation of the natural progression in my attempts to let go of these objects that I am drawn to collect and cherish. Through it we will explore meaning, shared value and exchanged value. It is both the Collector and the Storyteller in their most simplified state.