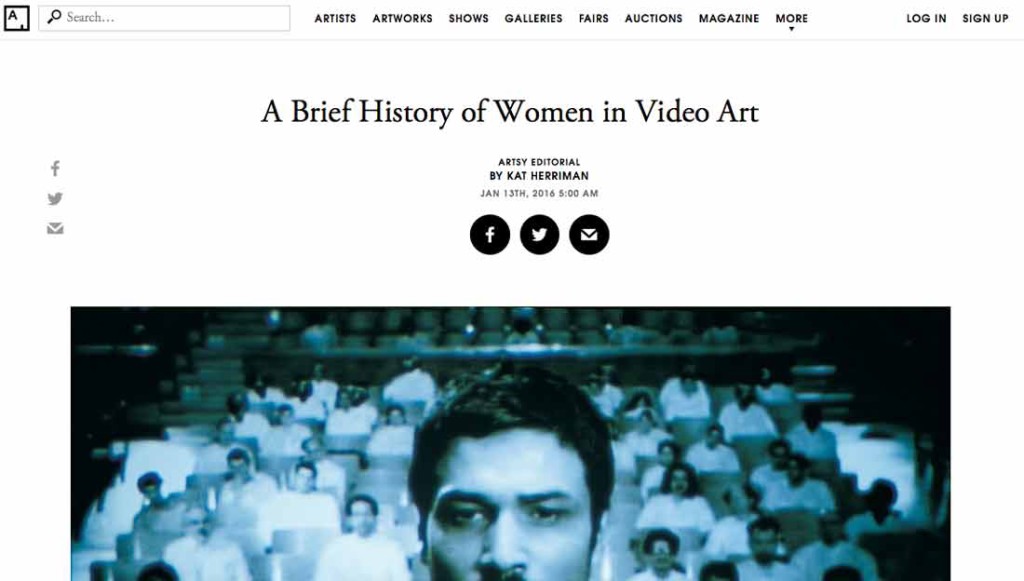 A Brief History of Women in Video Art

Artsy Editorial
By Kat Herriman
Jan 13th, 2016 5:00 am
In the 1960s, following the post-war advent of television in America, video cameras became available to consumers and quickly found their way into the hands of the international art scene. Lauded as the grandfather of video art, Nam June Paik was one of the very first to employ the technology, in 1963, with his Galerie Parnass show “Exposition of Music: Electronic Television”—and was soon followed by a slew of innovators like Vito Acconci and Peter Campus, who experimented with video in the early ’70s.

Unlike traditional mediums, however, this one wasn’t dominated by men. In video, women found a form free from the male-dominated canon, in much the same way that performance art provided unchartered territory for experimentation. Pioneering women like Valie Export and Joan Jonas quickly adopted the new technology, and today they are celebrated for their trailblazing legacy that paved the way for tenacious artists like Diana Thater, Shirin Neshat, and Sarah Morris. Now, a new generation of female artists including Rachel Rose, Chloe Wise, and Kate Cooper is building upon this rich history with bravado. Here, we take a look at how and why women became leading innovators of the digital medium…

Read the rest of the illustrated article at www.artsy.net/article/artsy-editorial-why-are-there-so-many-great-women-video-artists